I was sent a small sample of Katy Perry's perfume, Killer Queen. I was not impressed by taking an initial whiff. It smelled HEAVILY of Patchouli (almost so strong to the point where I was going to toss the sample and condemn it). But after an internal battle I decided to actually open the sample and try it on. It's not half bad!

I'm a fan of more musky scents and this falls into that category. According to Ulta.com, Killer Queen's top notes are Dark Plum, Wild Berry, and Bergamot. Middle notes are Natural Jasmine Sambac, Rainbow Plumeria, and Red Velvet Flower. Base notes are Cashmeran, Natural Patchouli Heart, and Liquid Praline. I'd say after a long inhale you can detect the Wild Berry, Red Velvet Flower, and Natural Patchouli Heart as the most fragrant. Katy Perry's Killer Queen is sensual yet playful, just like the singer who helped create it. "Killer Queen...is an intoxicating and charmingly playful floriental fragrance with luscious notes fit for royalty." That describes the perfume perfectly. It's sensuality comes from the muskier scents, but is well balanced by playful fruits.

The packaging of the full-sized bottle is stunning. "Inspired by a Queen's scepter, the jewel-shaped bottle portrays sexy sophistication and luxury. The rich gold crown cap showcases a custom crest capturing Katy Perry's playful essence." The bottle looks elegant, yet dangerous. Poisonous and Luxurious. Something you could imagine a royal displaying on her vanity. The only problem is, it doesn't come with a stand to keep it upright as it's portrayed in pictures. The bottle has to lay down. And for the price they ask for a full-sized bottle I'm sure they could have thrown together a clear plastic case to keep it standing upright. 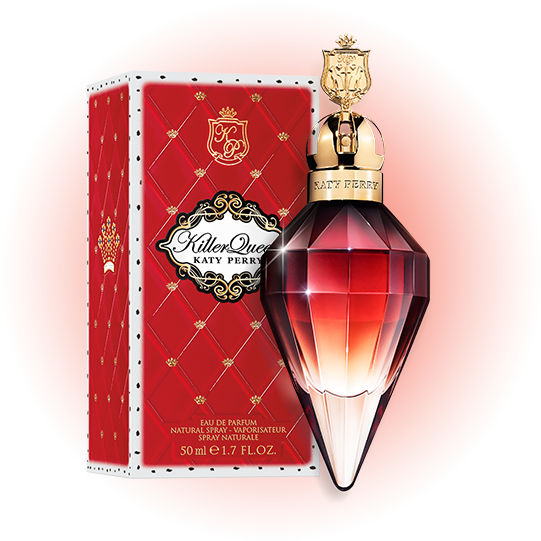 Overall, the perfume met my expectations. But it did not exceed them. As for the scent, it is very pretty. And I could see myself wearing it quite often. It's just missing that certain something I can't put my finger on. The packaging is gorgeous, but it has a notable flaw. I'd give Katy Perry's Killer Queen a solid B.

Until next time loves,